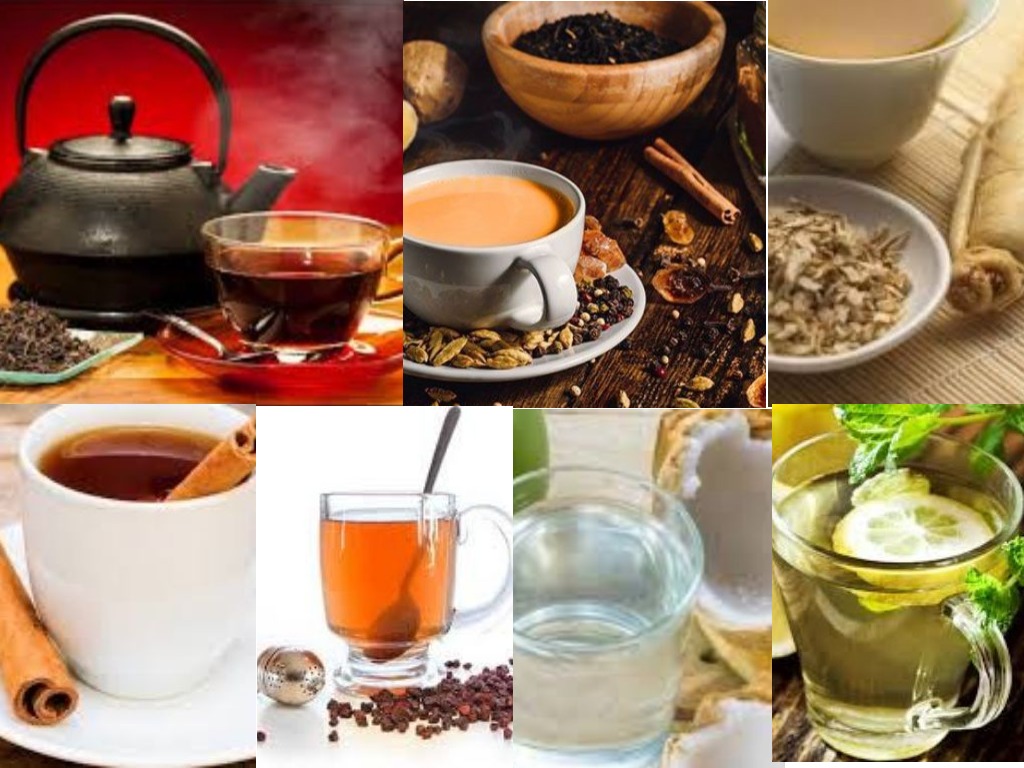 ai originates from India, commonly know as ‘Spiced Tea’. Its made by mixing of variety of aromatic spices with tea leaves. Basically tea, milk, sugar, fresh ginger and cardamon are main ingredients, but many incorporate more spices like cinnamon, black pepper, cloves and fennel seeds. Every spice has its own medicinal values. Ginger and black pepper helps with digestion, cinnamon promotes circulation and respiratory functions, cardamon elevates mood and many more.

Ginseng Tea is a herbal tea made out of plant roots. Traditionally its a Korean tea. It can be consumed for many medical reasons. It acts as an anti-inflammatory and strengthens the immune system; it can also counter fatigue for some, but this has not been completely proven scientifically. Some studies advise to have in 2-3 weeks cycle with 1-2 weeks break in between. And also not recommended for children and pregnant or breastfeeding females.

Cinnamon tea is made by boiling cinnamon along with tea and water. Sweeten it with dollop of honey. Cinnamon on its own has various medicinal benefits. Cinnamon tea if taken as your early morning drink could reap you many advantages later as it helps in weight loss, stress relief, good blood circulation, help fight illnesses like cancer, diabetes, inflammation, common flu etc, and many more.

Schisandra tea is a delicious and fruity liquid made with one of the major herbs, schisandra berries. It is native of China, Japan, Korea and Russia. It is commonly known as ‘five flavour fruit’ due to a multitude of flavours such as: salty, sweet, sour, pungent and bitter. It is made by boiling the berries in water. As it is an adaptogen, it helps decreasing fatigue, enhancing physical performance, and decrease stress. It even helps ailments like asthma, insomnia, etc

Lemon juice consists of citric acid and is rich source of Vitamin C. It has refreshing taste. Lemon juice taken with warm water as first drink in the morning, will help increase your immune system, metabolic rate and help reduce your weight. It helps fight common cold, infections, toxins, etc. As Vitamin C is known to produce collagen, which contributes to improved skin.

Tender Coconut water is extracted from a raw coconut, which is green in colour and has 94% of water. As the coconut ripes the water is reduced and more flesh is formed. It is relatively low calorie drink. It contains potassium which helps your heart to be healthy and have better skeletal and muscular function. It lowers your cholesterol and blood pressure. The fresh tender coconut water is more recommendable then of course from the carton as the carton ones are high in sugar.

Black tea is made by oxidized leaves of Camellia Sinensis. During oxidation the leaves turns to dark brown to black from green . It contains theophylline which helps to increase your heart rate makes extra alert. It has antioxidants that help the cells from DNA damage. Antioxidants also help prevent some types of cancer, heart attacks and cardiovascular diseases.